skip to main | skip to sidebar

Today I was busy around the house doing some more fall decorating. The little topiary always sits in my front entryway and I decorate it seasonally. I found the cute little pumpkins to put on it at Dollar General. The Give Thanks pumpkin I think at Wally world. The coat rack in my front entryway I strung the pumpkins across it and it says Harvest. I got it at my all time favorite store called Simple Treasures. I plan on doing a post soon about this adorable store. I just didn't think ahead at the time when I went today to take my camera. I also got the Bless Our Home candle holder there too. Hope you all have a fabulous weekend! I'm off to do some baking. Traci

My Dream Home NOT! 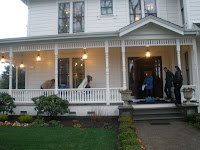 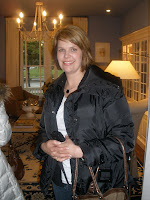 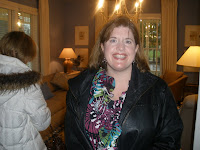 Okay, I have a little confession earlier this year I had a little obsession with the HGTV Dream Home. I entered faithfully daily and mailed in roughly (I lost track) many many entries. My hubby was ready to have me committed. LOL I Truly believed I would win. I had figured out which pieces of furniture I would keep and which rooms would need repainted. Yes, I really was getting crazy. When I found out my sister-in-law lived less than twenty minutes away I knew I had to finagle my way out there. I needed to get some measurements and figure out where I would keep my dogs (was the yard fenced) those sort of details. My fortieth bday was coming up so I told my SL I wanted to take a tour of the Dream home for my bday. So off I headed to CA.
The morning of the tour we all had to meet at a beautiful old French hotel. It was very cold and rainy that day but, nothing would deter me. This was pre-blog so I apologize for no pics of the hotel. I was a little annoyed these other people were coming with us on the tour. My dear Sl appeased me very nicely that morning. Despite my inanity. When we first got there we were a little overwhelmed by the beauty of the house. Everything was so beautiful and very shall we say looked like a decorator had done it. We were fairly calm as you will see by the pics above. 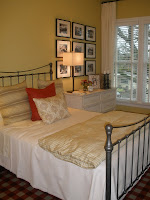 The pics below will show by the time we got to the second story we were getting a little giddy. Yes, that is me sitting on the toilet in the master bedroom. Seemed like a grand idea at the time. Not so sure now though looking back. I think our tour guide was wondering what she had done to deserve the two loony ladies on her tour. Anyway I have to say it was a lot of fun and an experience I will never forget. As you all know by now the HGTV people did not show up at my house to give me the keys. Oh well there's always next year!! 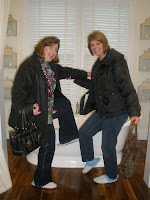 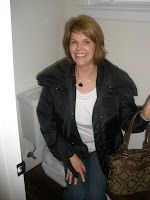 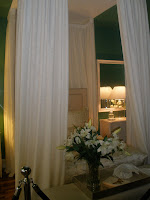 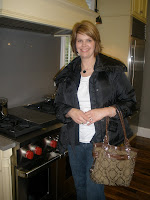 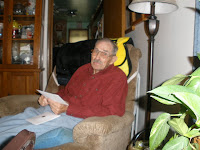 Yesterday I went to a very special man's birthday. My grandfather. He turned 95 years old. He and my grandmother still live on there own. He does everything himself such as mow,shovel snow, and still drives. When I think of all the things they have seen in their lifetime it truly is amazing! There were no radio's,tv's,and cars were a rare thing when he was born. I'm kinda jealous of all the amazing things that they have been through and witnessed. I don't think my generation will be able to say the same. Happy Birthday Gpa!
Posted by Traci at 12:53 PM 14 comments

Just wanted to put the word out I have been honored with being picked to be featured on Rachel's blog rachelgoing.blogspot.com (romantic porches). She shares my love for old houses and beautiful front porches. So I 'am very excited! I haven't been in blogland all that long and yet I have won a giveaway, met some lovely gals, and now been picked to be featured on a blog! What a wonderful place this is to be! So thanks to all you fellow bloggers out there you have been fantastic.Looking forward to meeting even more people. Have a wonderful day! Traci
Posted by Traci at 9:15 AM 19 comments 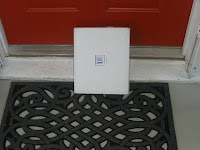 This morning as I was about to leave the house their was a package at my front door. It was my giveaway prize from Sandi at www.sandimyyellowdoor.blogspot.com. I of course excitedly ran back in to open it. So what if I was late for work! I have my priorities. Inside I found a lovely copy of Anne of Green Gables (one of my all time favorites!) A tin box with a pretty pic of Anne's house and her. A package of napkins called Anne on the quilt.(To pretty to ever use!) A piece of Heritage lace with a darling little pic of a watering can and birdhouse with the phrase "Whatsoever things are lovely, think on these thing." There was also a Prince Edward Island notepad. A lovely card enclosed from Sandi and my favorite thing was the sand and shells from the island! I know try not to be jealous. Sandi thank you so much! I love everything and will truly treasure it. My hubby still doesn't understand this whole blog giveaway thing. He swears there must be a catch. Men are so untrusting! We blogland gals are just a generous and sweet group. 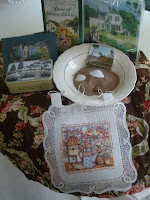 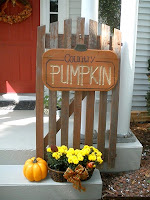 Happy Labor Day weekend everyone. Hope you all are having fun and being safe! I just worked on my front porch and did some fall decorating. I can feel it in the air. Take care!
Posted by Traci at 3:15 PM 6 comments 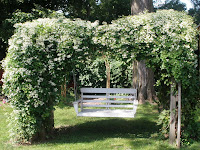 TI thought I would do my first post on White Wednesday. This is one of my favorite places to sit and just chillax! The vine is called August Clematis vine.I can't wait till fall every year just to see this bloom. 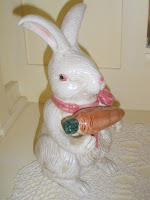 This is one of my favorite white bunnies I have. I just can't resist
bunnies! I keep them out year round. 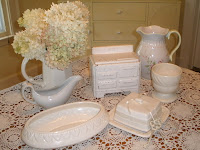 Here are some of my other white favorites. I love the child's stove. I usually display it in my kitchen. The ironstone gravy boat I recently picked up at a yard sale for $.50. The pitchers were both given to me from my Mom. Thanks Mom! The flowers were thanks to my hydrangea trees out back. I sure do love them and they just turn more and more pink. 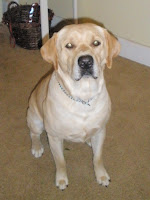 Now of course I couldn't forget my favorite white dog Pete! He kept trying to get in the photos so I finally told him if he must have his picture taken to sit. So he did. Hope you all have a fabulous White Wednesday!
Posted by Traci at 10:08 AM 18 comments

My How Time Flies! 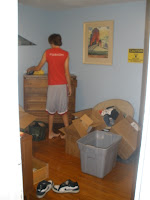 This is what my youngest son's room looked like Saturday night. Was it really eighteen years ago when I first looked into those warm, loving eyes? First held those little fingers? My how time flies! Was it really all that long ago I was depended on for everything he needed and wanted? Seems like yesterday I was nurse, taxi service, counselor, judge, referee, cook, maid, cheerleader and mom to this young man! Well I always knew this day would come just not this fast! So we packed up his stuff, alooot of stuff! Yesterday we drove my youngest son to college. We joined hundreds of other parents on this journey. I tried to remain calm and cool. I was pretty sucessful I didn't break down into a total blubbering mess. Today, another story as I feel eerily sad and lonely for a part of me that has left. I just have to hope and pray I have taught him all I could and he has the knowledge and skills to survive out there in the big bad world on his own! I'm happy he is there with his best friend and they are also roommates.(hopefully this all goes well) 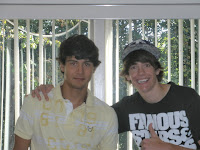 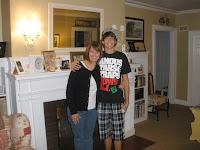 Not a braver battle was fought

Just wanted to say thank you for all your thoughts and prayers for my cousin and her family. That was greatly appreciated! She courageously lost her battle with cancer last Wed. I just take comfort that she is now free from pain and suffering. Her family held the most beautiful memorial celebration of life ceremony for her. Where friends and family just gathered to share memories and look at photo's. I was amazed to see the awesome scrap books she had made for her four kids since they were babies. She was an amazing mom! At least they will have those memories to remember her by. Good Bye sweet angel, Angi.

Houses in my neighborhood

I was recently reading a blog entry at Cottage state of mind. Dawn was telling the history behind her house. I find that kinda stuff very interesting. It got me to thinking about the history of my house and the block we live on. Our house was built in 1920 by a very wealthy family the Bellamy's best known for the fact they started and owned a little local telephone company. They actually owned the whole block and in each of the four homes were occupied by various family members. There was ma and pa Bellamy who lived in our house and then two brothers, and I guess the grandparents lived in the largest brick house. Behind our house was grandma's gardens and as our neighbor behind us Shirley (who eloped with one of the brothers) told us they had to wait for grandma to die before they could tear out the garden and build their home. So a lot of the old timers call it the Bellamy block. I guess back in the day they were all very wealthy and they actually had they're own parking lot and tennis courts across the street (they're are now houses there).


This home sits across the street but supposedly was on our block at one time. 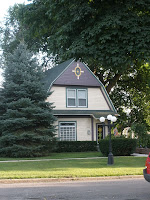 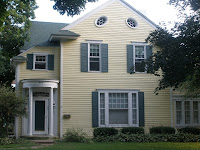 This house sits next door to us. It is the oldest on the block built in the late 1800's. It was originally one story but during the 1920's the house was lifted and they made it two story. One of the brother's lived in it. It is also the house everyone tells me if they won the lotto they would buy?! I would probably go for the brick one personally. That's just me.

This is the big brick beauty the grandparents lived in. Let me tell you it's yard is always gorgeous! 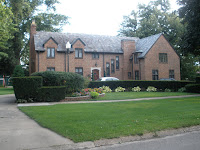 This is our home where the parents lived and raised the two boys. I just think it is so fun to find out the history of homes and the people who once lived there or as my boys swear might still live there! 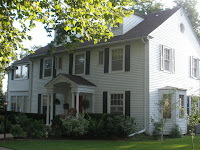 Traci
I'am a Wife, mother,sister and friend. I'am a hairdresser by day and a decorating diva by night! I loove to decorate and love old houses almost to the point some people think it is an obsession.My hubby and I have been married 21 years and we have two sons off to college this fall. Whoopie! No, seriously I will miss them very much!We reside in our 89 year old cottage (technically it is a colonial but I have visions of granduer that it's an adorable cottage. shhh!)

Please feel free to email me 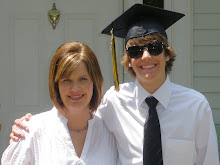 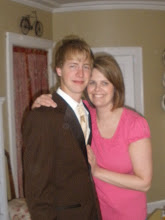